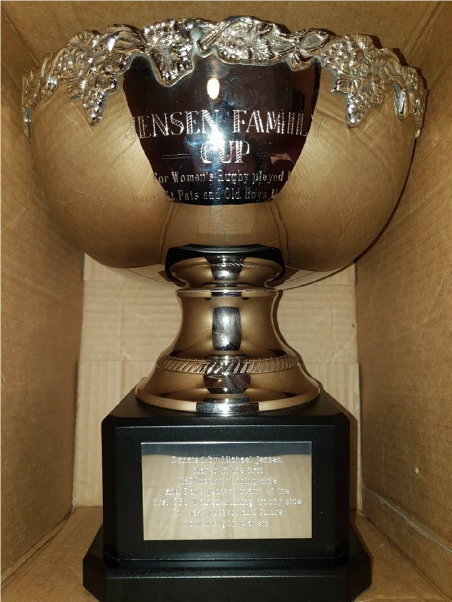 This Saturday the OBU Impalas Women take on the MSP Women.

It is Gala day for women’s rugby so this means that the fixture is to be played out at Fraser Park on the artificial turf. This is a big day for Women’s rugby and a big day for Dave Jensen who’s family have generously donated this trophy.

There aren’t many games left for the Impalas this season so if you have been thinking about coming along to watch this is your ideal game! I know the team would love to see some supporters! Wear some OBU colours or make yourself known to the team staff by giving them the nod and the thumbs up!

More about the cup itself

The Jensen Family Cup is to be played between the Marist St Pats women and Old Boys University Impala teams. It has been donated by the Jensen family.

Michael Jensen was a player in the first-ever Marist St Pats trophy-winning side, the Junior 1st’s in 1971. He also played for Wellington Juniors in the same year.

Dave Jensen was the coach of the first-ever Old Boys University Women’s trophy-winning team in 2016. He also went on to be a part of the Wellington Pride coaching set up. The Jensen Family Cup is believed to be the first interclub trophy for women’s rugby in Wellington.