The Tango - you won't see it done this well on Courtenay place at 1 am! 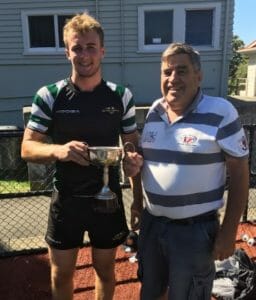 Martyn Wright presents the Calvin Wright Memorial Cup to Joe Sharland, the Colt greens captain and player of the day

It was a special day with members of Steve Letica’s family present not just on the sidelines, but playing. Tobias Christensen, who is Jan’s grandson, played for colts green as a loosehead prop.

Congratulations to Colts Captain Joe Sharland who picked up not only the Letica Cup from Jan Christensen (Steve Letica’s sister) for the winning team but also the Calvin Wright Memorial for being player of the match. It was great that Martyn Wright (Calvin’s brother) was on hand to present it.

The festivities continued at the Cambridge afterwards with a great turn out from the Colts teams to a function that featured President Murray Anderson presenting HE Fausto Crozet (Argentine Ambassador) with his Honorary Vice President badge followed by an excellent presentation from the Ambassador about his homeland.