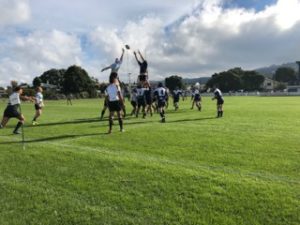 A strong first half and stout defence wasn’t enough for Old Boys university to hold off a late-surging Petone at the Petone Recreation ground.

OBU had a 12-10 lead, and a stiff breeze at their back, with 20 minutes to go but some fine goal-kicking from Petone’s Logan Henry and a late try saw the Villagers victorious.

Ian Kennedy crashed over in the corner to open the scoring for OBU after Dale Sabbagh split the defence and made his way into opposition 22.

Then just before halftime OBU strung some phases together deep inside opposition territory. Jonathon Fuimaono bustled his way over the line from close range to give the Goats a 12-3 lead going into the break.

OBU then turned around and had the wind at their back for the second forty, but were required to put in a big defensive effort with Petone controlling much of the second half territory and possession.

Despite a resilient OBU defence, holding Petone out for multiple phases inside their five-meter line, they home side eventually scored their first try of the match through prop Alapati Soke.

Two successive penalty kicks into the wind from Petone’s Logan Henry saw the home side take the lead 12-13 and then push the lead out to 12-16.

Both teams would finish with 14 players after Eduan Struwig and Jason Eaton (yes 15 test All Black Jason Eaton) received their marching orders after a late skirmish.

Petone then ran in another try to leave the final score at 12-23.