Barry Tucker, one of the originals, remembers the early days of the 7oz as follows….

“The Victoria University 7oz was formed in 1978. Set up by Rowan Waterhouse and a few others (several from Hastings) in their first year at uni at Vic house. I coined the name and suggested it to Rowan who loved it and the 7oz were born. At first he probably applied to the forward pack!

Copious drinking occurred of course, but only one game was won in that first season! For some reason, the lowly grade we chose was full of past greats including Ken Gray and Dr Hugh Bury (the all blacks doctor I think) and so it began!”

The following is an excerpt from the excellent history of VURFC written by John Anderson*. It has been updated slightly to add Sleeper Mamea’s real first name ‘Silipa’ and to bring it into the present time (‘current’ in 1987 is now quite some time ago).

The Seven Ounces had their beginning in 1978 when a group of first year students from Victoria House discovered that for the meagre sum of $5 they could join Victoria rugby fraternity and avail themselves of the club-room facilities on Saturday nights: this made a welcome relief from the more hazardous conditions in downtown pubs. As a sideline they also fielded a social rugby team with a very limited amount of success – in fact they won only three competition games that year.

They continued with a mixed degree of success until 1981 when Rowan departed for his ‘OE’ and Alan ‘Luigi’ Seerup took over as team mentor. By then they had become known as the ‘Seven Ounces’ a name suggested by one of the larger members of the team, Big Mac. It is derived from their favourite size of drinking glass.

During 1981 things started looking up for the Ounces as they won a majority of their games.So ambition and a truly competitive spirit began to appear. Things became so serious that, they report ‘an actual real rugby practice with boots and a ball and stuff’ was programmed. Happily, they say, attendance was very poor and the session was instead given over to a discussion of tactics in which the well known Seven Ounces moves ‘Diddly, Diddly’ and ‘Brunswick’ were developed.

After years of competing in J7 a real opportunity for the Ounces came about in 1982 with the creation of a J8 grade as the last of the junior grades. Following their well established  tradition of saving the best till last they promptly entered themselves in this grade. Successful years followed and in 1983 they shared with Soixante  Neuf the Rupert Mackie Memorial Shield for the most successful Victoria team in club competition.

They had another successful year in 1984. They were runners-up in their grade, were again awarded the Rupert Mackie Shield and, to cap it all, lifted the Jackie Ruru Memorial Shield from Groat. The Ounces were runners-up again in 1985 and finally, after 8 years, beat the ‘Petone Juggernauts.’ Not only that, they successfully defended the Ruru Shield, as they did again in 1986 and 1987.

Points centurions in recent years have been Graham Sinclair in 1983 and Phil O’Connell in 1984 and 1985. They distribute their own newsletter, written by Sleep Mamea and since 1980 have embarked on annual tours to Palmerston North, Christchurch, Auckland, Raetihi (twice), Westport and Hawaii.

The team is currently managed by Paul Peek and Sleep Mamea, who is also team oracle and designer of the ‘Seven Ounces’ emblem which can be seen on their sweatshirts.

As you may have picked up from the information above, there are several stories as to how the 7oz name came about. Another more colourful but probably less likely story is related to the Universities Easter tournament which were a massive event on University Calendars.

The 7oz dominated Ruru rugby for a number of years in the 80’s and early 90’s.

The End of Times…

1998 was the last season. The telephone tree management* team of four, reduced to just Luigi as Steve ‘The famous horror story writer’ King, Jason ‘Pimp Looking Mofo (PLM)’ King and Pete ‘FHLVVFFRPI’ McFarlane all went overseas. There was only a dozen or so players on the books and limited prospects of recruiting more.

*Back in the day before mobile phones, email & social media were common, the 7oz draw was announced by – one person contacting the union then ringing 4 people who rang 4 people etc.

Some of the Characters & SFW Stories

77 Minutes on the team

The player of the day got 77 minutes of free drinks on the team. The player of the day could shoulder tap anyone and say ‘Pint thanks’ and expect their glass to be filled. Most of the time it went by with a token 2 or 3 pints except when greedy pigs like Luigi, Bumface, FHLVVFFRPI Pete or Roly got involved.

Each season one of the key events was the bus/boat trip it was mostly just a bus trip to pubs that no-one in the team would normally go to like the Medway in Island bay, Vincent’s in Newtown, Posties whistle in Kandallah etc. In later years a boat leg of the trip was introduced halfway through the evening which left from near Te Papa. The 7oz wives and girlfriends were a big part of the team and this was the event that brought them out in force! Notable highlights were drinking a keg in the Paraparaumu railway underpass in a freezing southerly, on the wharf in Seatoun on a better night and a walking bus through the Georgie Pie drive thru near the Basin.

Each week someone would be nominated to write the newsletter using the team template which was essentially a frame made from arses within which the writer was free to do as they wish. This was before email was common so would be photocopied and physical copies handed out before the game.

Usually between 3 teams. This was as hideous as it sounds but great fun!

Most year there was a team trip at the end of the season. Sometimes rugby was even played. These all have their own unique stories that need to be passed on verbally due to the nature of the content! Ask a 7ozer about these trips, Brisbane, Ohakune, Auckland and Christchurch. 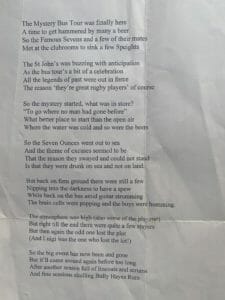