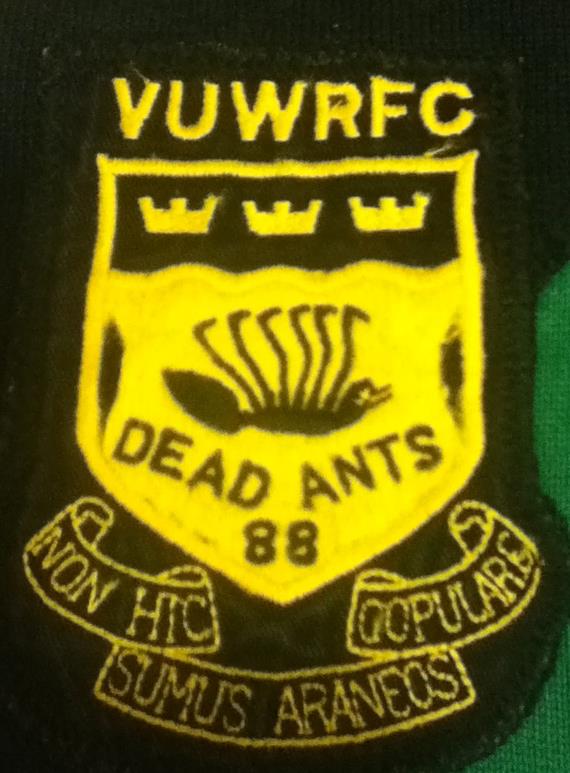 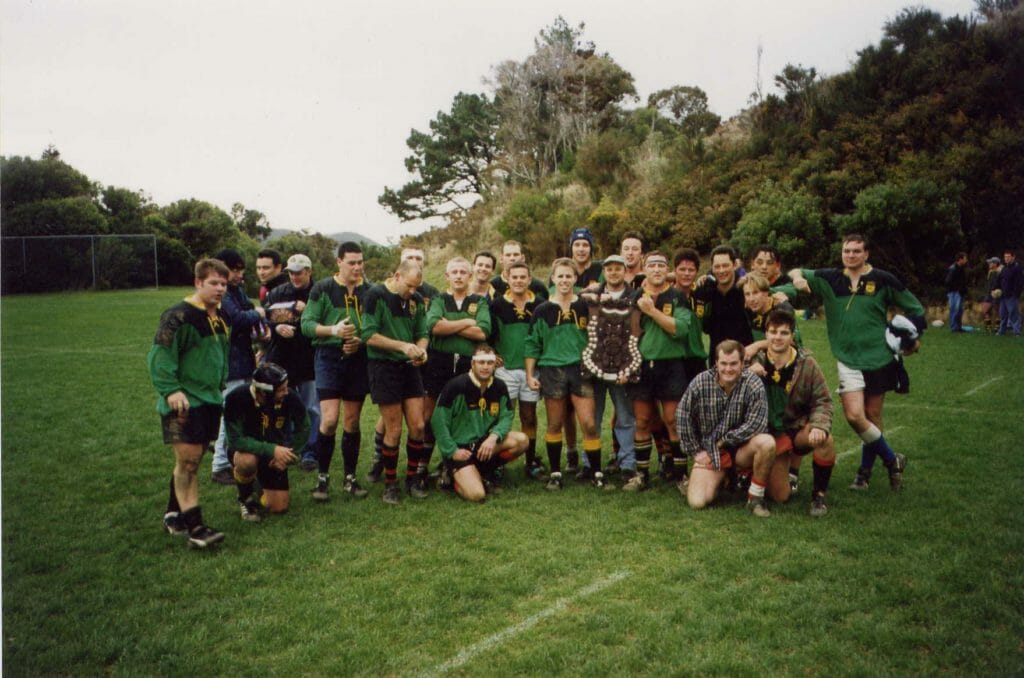 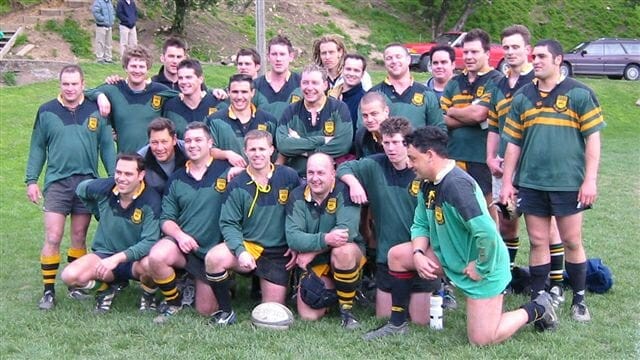 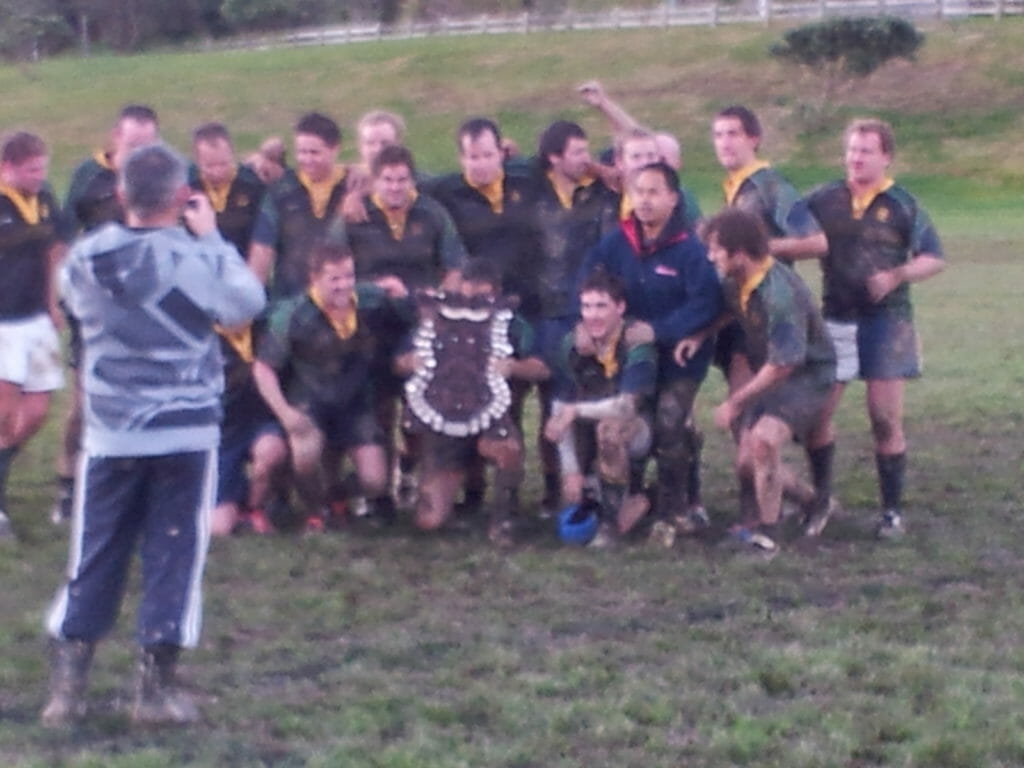 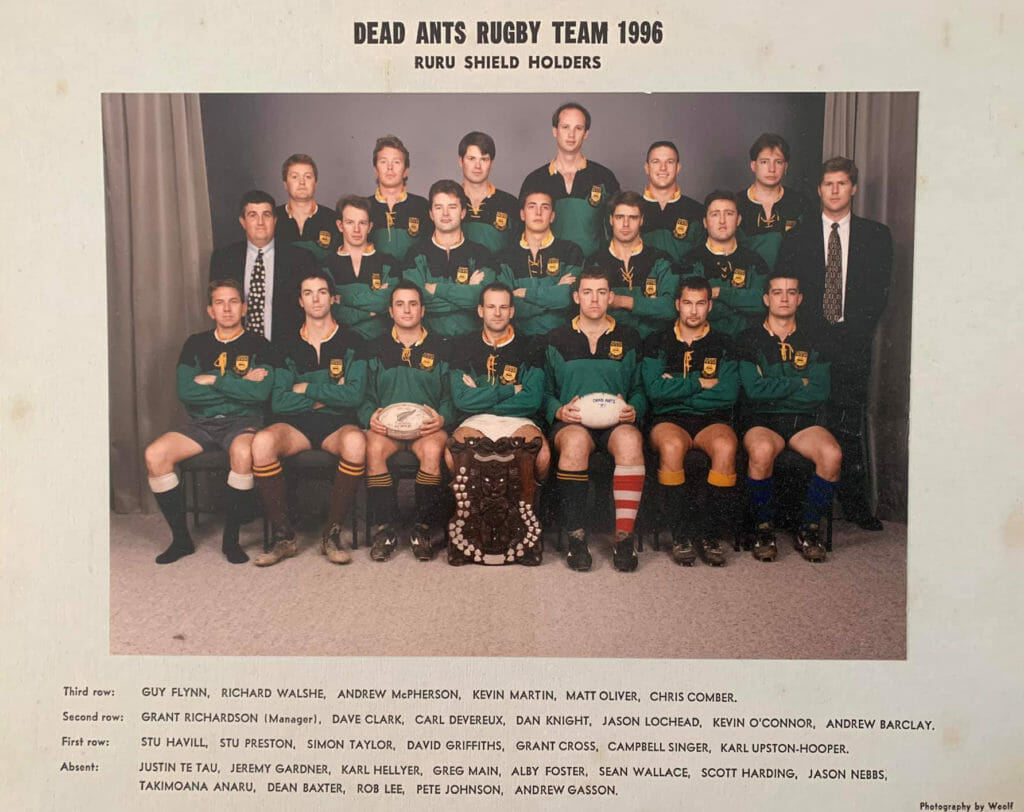 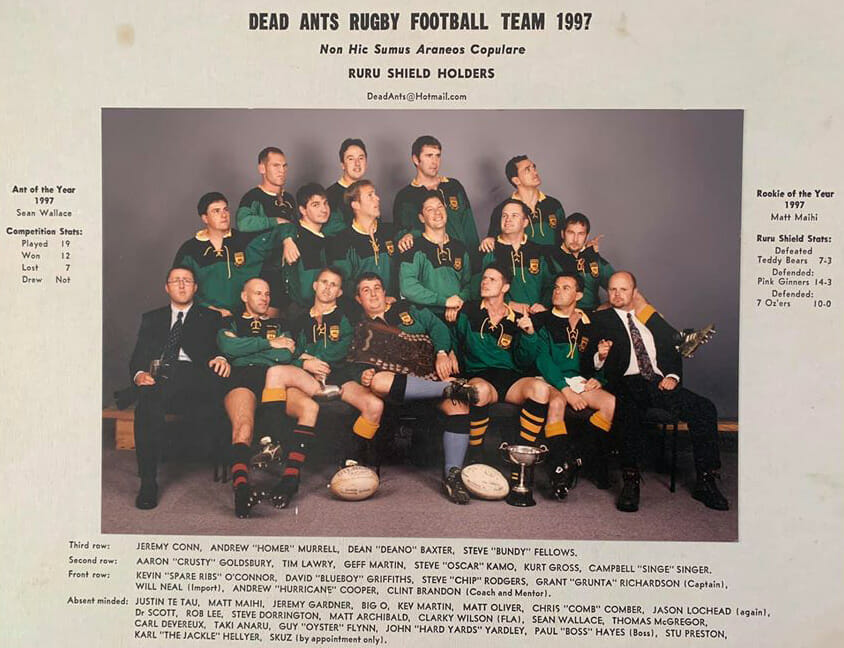 The Victoria University Dead Ants formed in 1988 out of the previous year’s colts team players who didn’t want to play in the training grades.

The founding players were…

‘Pete it’s fair to say I was heavily involved in the starting of the Dead Ants including being Captain, Manager, Police Liason and the only member who owned a car for the first couple of years. All the boys in the first photo drank together at Scribblers (an upstairs bar at the St George’s hotel for those whose memories or lives don’t go back that far) on a Friday usually and that was where the idea was born. Originals name was going to be the DTs as that was the general feeling most Saturday game days. Once Blue and Fatman put the team onto the diet of Chicken on a Raft while watching High Chapperal on game day things improved (but not much).

‘GAS and Dobson were tour managers as well as being fluent in Upper Hutt which came in handy several times. The Engineers Ball trip to Canterbury due some police attention due to a nude dine and dash event but i’m reliably informed the police record no longer exists. That was followed by an international trip to Qld and most of us still have gastritis as a momento of that torrid week. We were stopped by the authorities trying to load the QLD front door mat onto the plane home but noone got too fired up.’

Results in the first few seasons were mixed….

*A much tamer interpretation than the real thing. Use your imagination.

The Ants developed into a strong team lots of pace out wide and some true forward grunt.

1996&97 were two of the more successful years where the Ants managed to hold the Ruru over summer to get the honours as you can see in the photographs above.

Over the years there were sevearl traditions observed including –

In 2009 there was a trip to Misoula in the USA for an annual tournament called maggot-fest. I believe it all came about from Mike Plevilech (unsure of spelling probably wrong) who was living in NZ but originally from the cold areas of the US where rugby is played before and after winter.

The Missoula Maggots sent their bus to pick up the team from Seattle (?) which you will see among the photos. Basically it was like the black version of the South Park bus.

Fundraising went on for a year or so beforehand including moving a warehouse full of rock samples from the geology department down to a new warehouse by the architecture school on Vivian street. This was organised by Oscar who was working at the university at the time. There was also some section clearing work and a few other bits and pieces of fundraising.

The tour was a riproaring success with nearly everyone making back to the plane with many players making the return flight.

The End of Times… or is it?

Most of the team were about the same age and inevitably the trickle of retirements became an avalanche with a few notable exceptions continuing for a while.

The team officially folded into the teddy bears where about 10 or so players continued to lace up the boots for a few more years.

Earlier, many of those that had already retired from reserve grade Ants rugby and those on the cusp of retirement got together (with assorted others in a similar situation across the reserve grades) to form the the Dead Antiques for the world Golden oldies tournament here in Wellington in 2006.

The Antiques are still going strong and have scheduled matches about 10 times a year throughout the region with the odd trip away thrown in for good measure. These are usually Sunday afternoon casual affairs with a beer and a feed afterwards.

Some of the Characters & SFW Stories 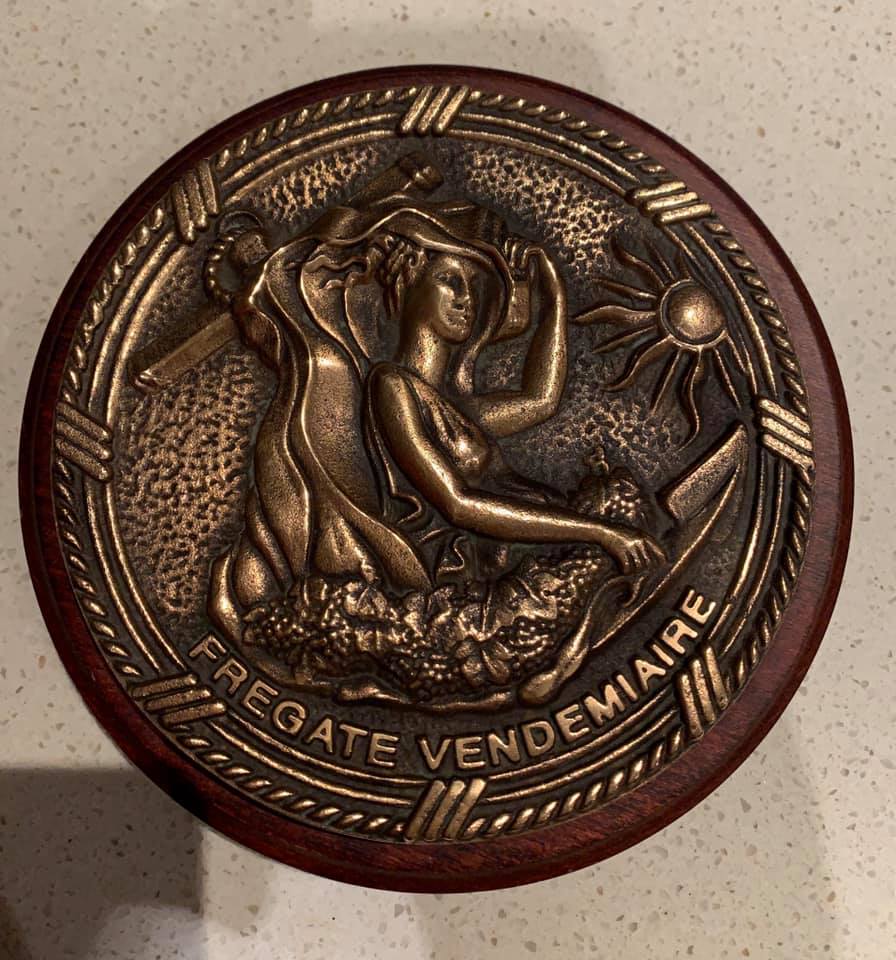 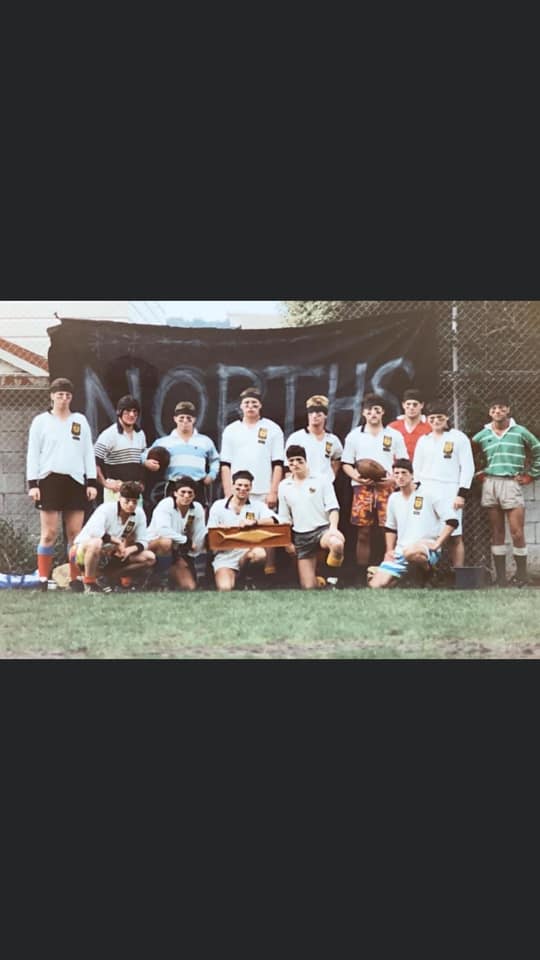 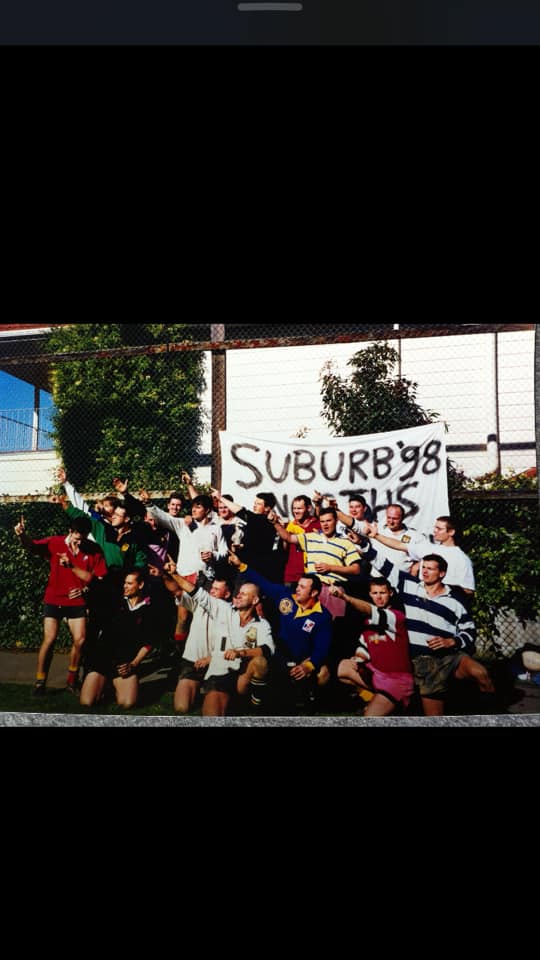 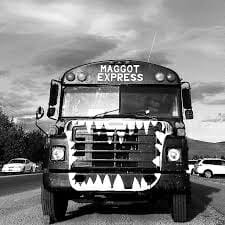