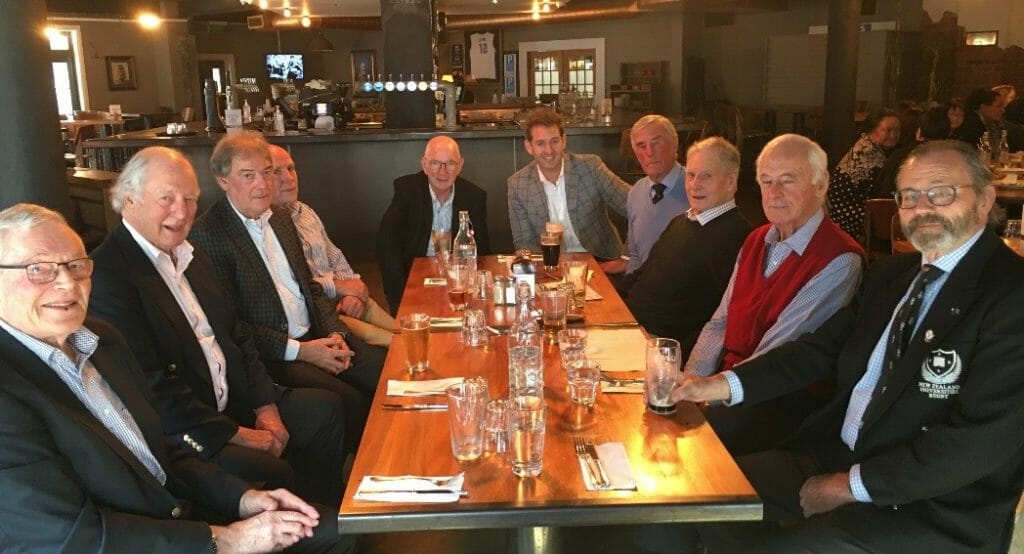 A great All Black, former University team coach, President of the VUWRFC, President of the Wellington Rugby Union and current President of Centurions Rugby Club celebrated his 90th birthday, 2 August 2020.  Mick was an All Black in 1952, 1956 and 1960 when vice-captain for tour of South Africa.  During his playing days, he was also selected for NZ Universities (1955-57) and the provincial teams for Auckland (1952-53) Wellington (1954) Manawatu (1955) and Canterbury (1955-59).  From 1963 to 1965 and 1971 and 1972, he was coach of the Victoria University of Wellington first fifteen, winning the Jubilee Cup in 1964.  His illustrious playing career and tactical acumen was recognised with his election as President of VUWRFC from 1980 to 1982 and later as President of the Wellington Rugby Union.  He is a Life Member of OBU & is proud to have an OBU Junior team named after him – the Under 8 Bremners.

Mick played mostly at second five-eight, but also at first five.  He is remembered as a fine sportsman, a most reliable five eight who played the game with enthusiasm, and who often featured as the key person for achieving a win for his team.  There are three occasions in particular in the 1950s when Mick initiated play that brought an exhilarating result for his team.  These three wins have been long remembered in the history of the game in New Zealand.

For Canterbury, against the British and Irish Lions team of 1959.  This game has been described by the members of the Lions team as the toughest and roughest of their whole playing career.  Near full time, the teams were tied and then a jinking run from Bremner to score a try and a historic win for Canterbury.

For New Zealand Universities against the Springboks, at Athletic Park in 1956, the Universities played spectacular rugby but didn’t clinch the extraordinary win until Tanner ran the length of the field to score a try.   But it was an intercept from Bremner earlier in the movement that allowed Tanner to break free.

For University against Petone at the end of the season in 1954.  University was attempting to win its third Jubilee Cup in succession.  At full time, the score was even and the game seemed at an end when Petone were awarded a defensive scrum.  However, an unsung hero. Denis McHalick the University hooker won the tight head and the ball was passed to Bremner.  Bremner reversed the play and kicked the ball back over the scrum into the hands of the flying Ron Jarden on the left wing, to score the winning try.  This result brought huge excitement and celebration for the University team and their supporters.  The decisive play from Bremner was talked about by the old-timers for many, many years afterwards.

Thank you, Mick, from OBU, for all that you have done to contribute to the betterment and enjoyment of rugby at Victoria University and throughout New Zealand.