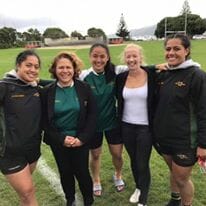 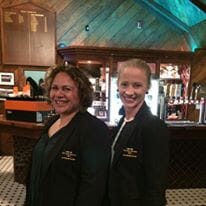 This week we caught up Hiria McRae who is getting very close to the 150 game mark for the OBU Impalas team. She had lots to tell us about how things are going for the Impalas this year and about her plans for next season too!

I’d been playing for Petone and Avalon and was selected for the Wellington Pride. While I was there I met Tuila Waterhouse, Jas Stevenson and Claire ‘Shorty’ Rowat.

We became good friends and so I came across to OBU!

My 100th game for OBU. We played Norths in the 2016 gala day at Petone. It was a really even game, with the scoring going back and forward. In the end, we managed to get the win. It was the first time we’d ever beaten Norths and we won the challenge cup to top it off!

It was exciting enough to play my 100th but to also beat Norths and win the Challenge Cup was just awesome.

Back when they were in the grade we had a regular trip to play Eketāhuna. They were a really strong team, we really enjoyed the road trip and the experience of real grassroots rugby! They were fantastic hosts and the trip home was great fun!

Are you involved in rugby these days? Tell us about it.

Yes I’m still playing for OBU and brought up my 140th last weekend. If I play all games I’ll end up on 147, 3 games short. I’m really impressed with the attitude of the team this season. All of the players that were here Pre-covid have all returned. We have a bunch of really committed players on and off the field.

I guess you’ll reassess at the end of this season if you want to carry on to the 150 next season?

What no way! I’m determined to come back and get to that 150! I see it as being really important to my team and woman’s rugby in general that we see women getting to these milestones*!

What’s life like outside OBU? Where are you these days?

I‘m a senior lecturer in education, training primary & secondary teachers. My focus areas are science and technology as well as some core te ao Māori. Playing for a University team means I am able to talk about more than rugby with my teammates. As well as having rugby as an outlook back at work.

I would also really like to acknowledge those that have really helped our women’s rugby team over the years including players, coaches, managers and our current management team Tara, Mark, Gina, Budgie and Jennie. In particular, I’d like to thank Patches, Trapper, Maree, Paddy and more recently Tomasi and who have all given the gift of knowledge and support.

* Watch out Fui, Hiria is sneaking up on you for that two hundy!