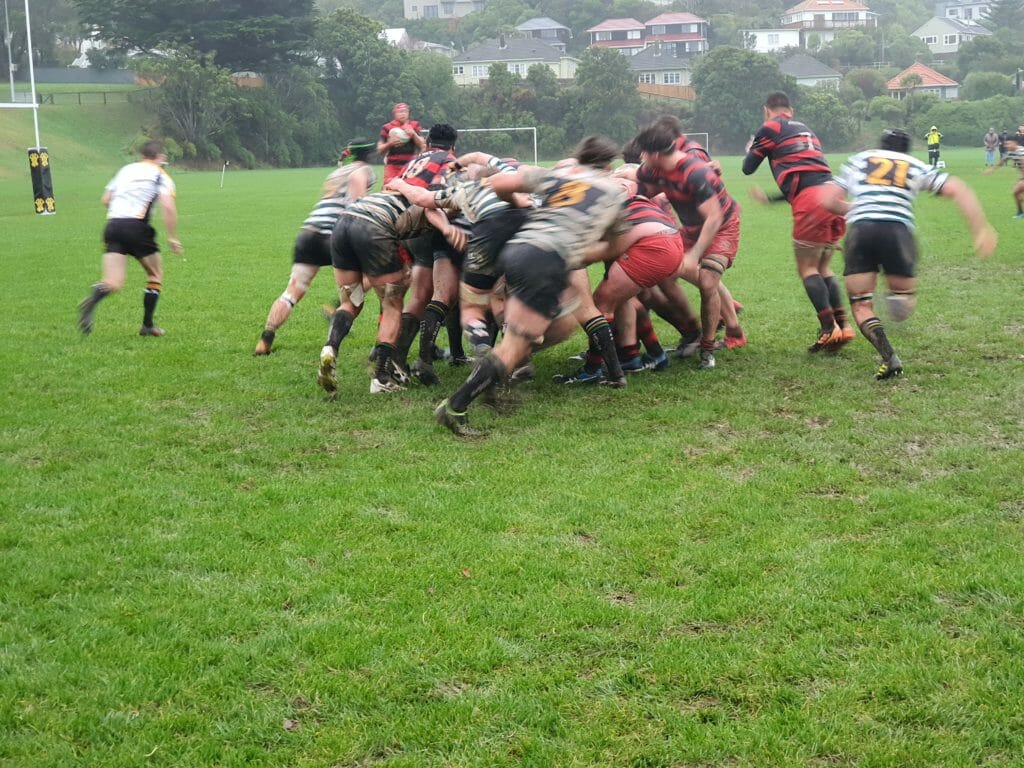 It was a cold & wet affair on Saturday as OBU took on the red and blacks from the other side of the tunnel. To be fair I have seen it colder and wetter at Nairnville, but that’s still not much consolation when the water is smashing you in the face!

Nevertheless it still felt like a real privilege to finally be getting some code!

Paddy Carter ran on ahead of the team to bring up his 50th match in what seems an incredibly short time. Congratulations to Paddy for forcing the hand of the honours board painter to buy a new tin for the season!

From the kickoff, there was plenty of endeavour from both teams. OBU had the wind at our backs although it seemed to shift around quite a bit making the 2 early penalties by Dale Sabbagh a little tougher than they would normally be. This got us out to a 6 point lead around the 15-minute mark.

Wirangi Parata freshly back from a stint playing in Portugal managed to dot down off the back of a maul of sheer beauty which started from a lineout drive 7 metres out from the line. Next up Matt Sleith got through a mass of bodies to score just before half time also from a lineout maul.

Poneke hit back with a try at about the 60th minute with the wind at their backs. It was the result of some fairly straightforward pick and go’s on the OBU line.

OBU scored the last try to Shamus Langton after the powerful scrum earned a tighthead and he took the opportunity to dart around the side before the Poneke defence realised the ball was out. There was only a couple of minutes left on the clock by this stage and the chances of scoring another try for the bonus point were a bit slim and did not come to pass in the end.

Poneke didn’t seem to have an answer to the OBU maul which is unusual as they are one club that usually loves slogging it out in the mud! They also gave OBU a few extra chances from unforced errors, particularly a couple of dropped balls from deep kicks without any real pressure. Perhaps the player’s minds were already three steps ahead of the actual play!

On the other side of the equation, OBU was on the wrong side of a very lopsided penalty count. Mostly for ruck offences and for being in front of the hindmost feet. Repeat penalties sending us from hot on the attack to defending our line in the matter of a few minutes. Luckily for us, the referee didn’t want to take it any further.

This really was a day for the forwards. The OBU backs worked hard to try to stay involved but the conditions just weren’t conducive to the open running rugby style OBU is known for. Standout backs were Sam Reid who played the best game I’ve seen from him in the green and white. He ran back kicks well, gained good ground with his kicking and killed a few Poneke attacking moves with accurate spot tackles. New halfback for OBU Kyle Preston had an impressive debut in OBU colours. Not his first time at premier level though as he has played for Tawa previously. With Matt Fowler coming off the bench in the last few minutes we’re well represented at the base of the scrum this season.

The forwards are a bit harder to single out as it was really a pack effort throughout the game but Shamus Langton seems to have grown in physical and game stature this season proving to be a real menace at the breakdown in particular. Paddy Carter made more of a pest of himself on the Poneke throws the longer the game went. Taine Plumtree and Sam Godwin both upset a few more lineouts when they came on also. Taine made one particularly memorable run with the ball in hand, just not quite having a support player close enough to make it really sting. As ever the front row was powerful in the scrums and dynamic around the field, no surprises Fui was amongst the thick of it for most of the match and Wirangi got good reward for plenty of hard work with his try.