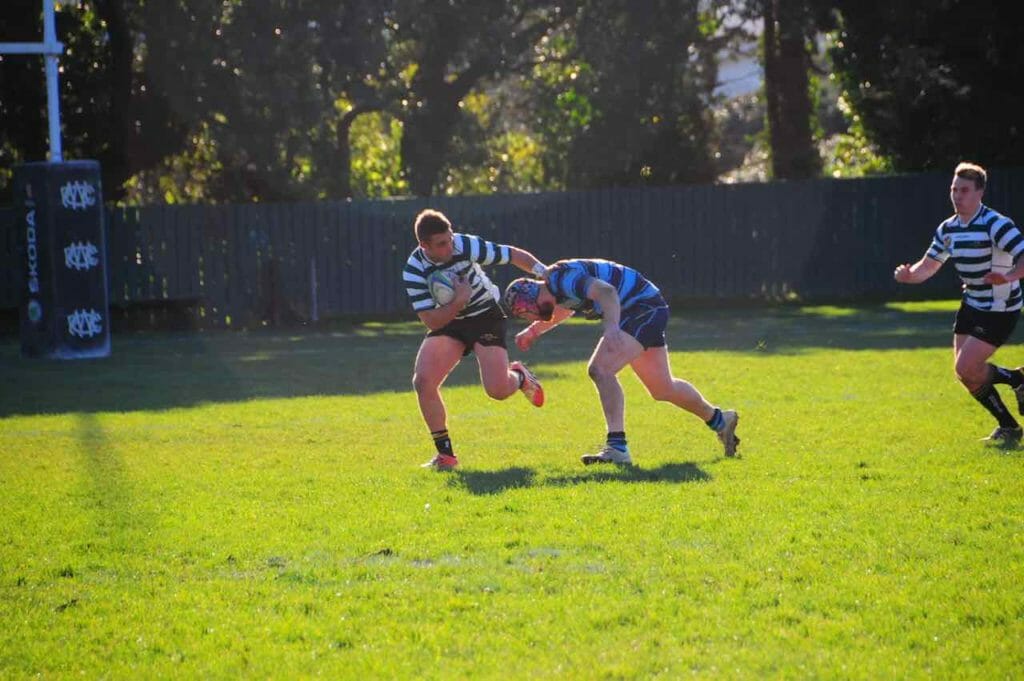 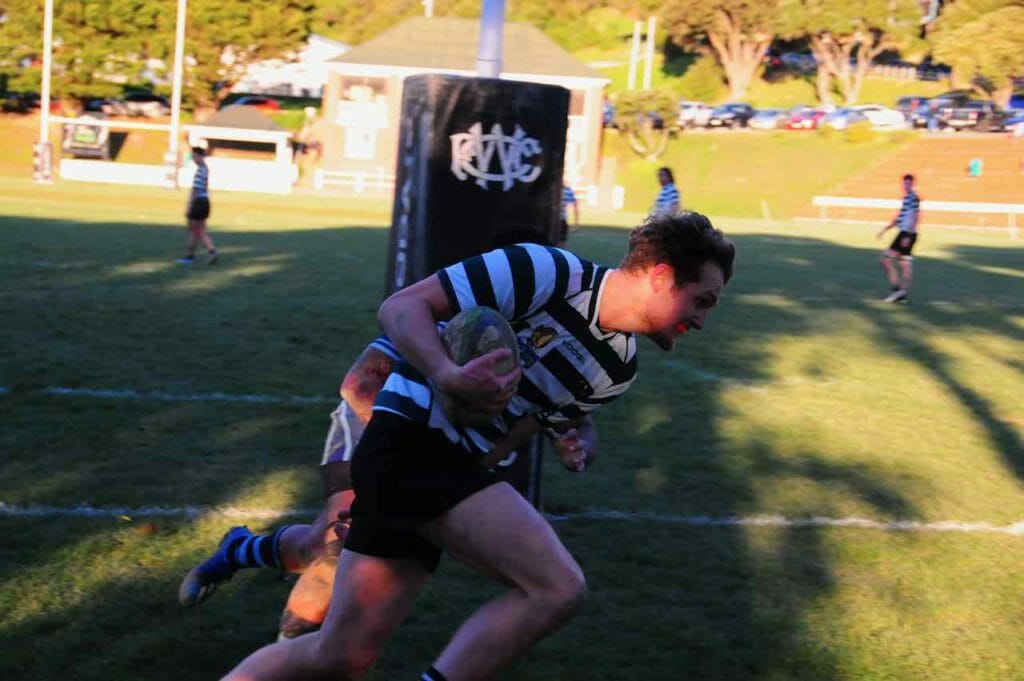 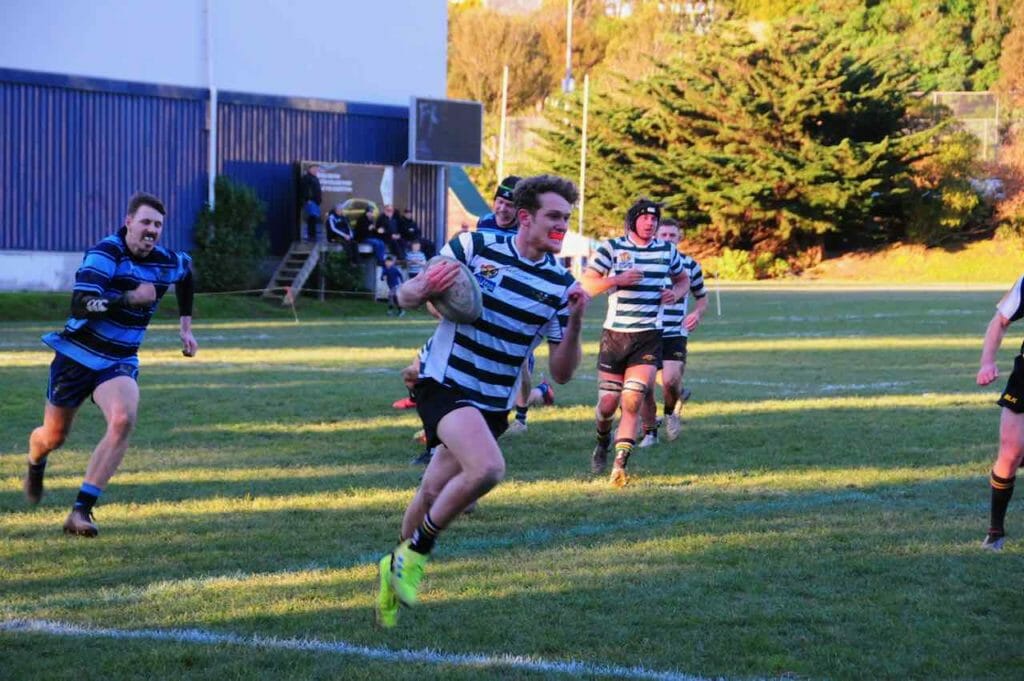 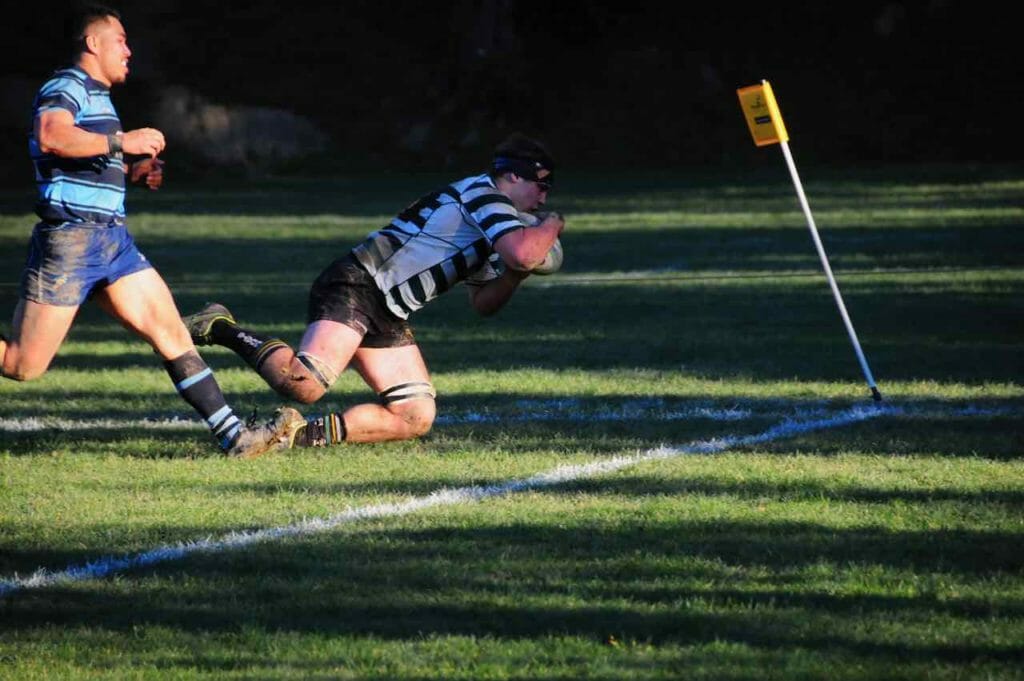 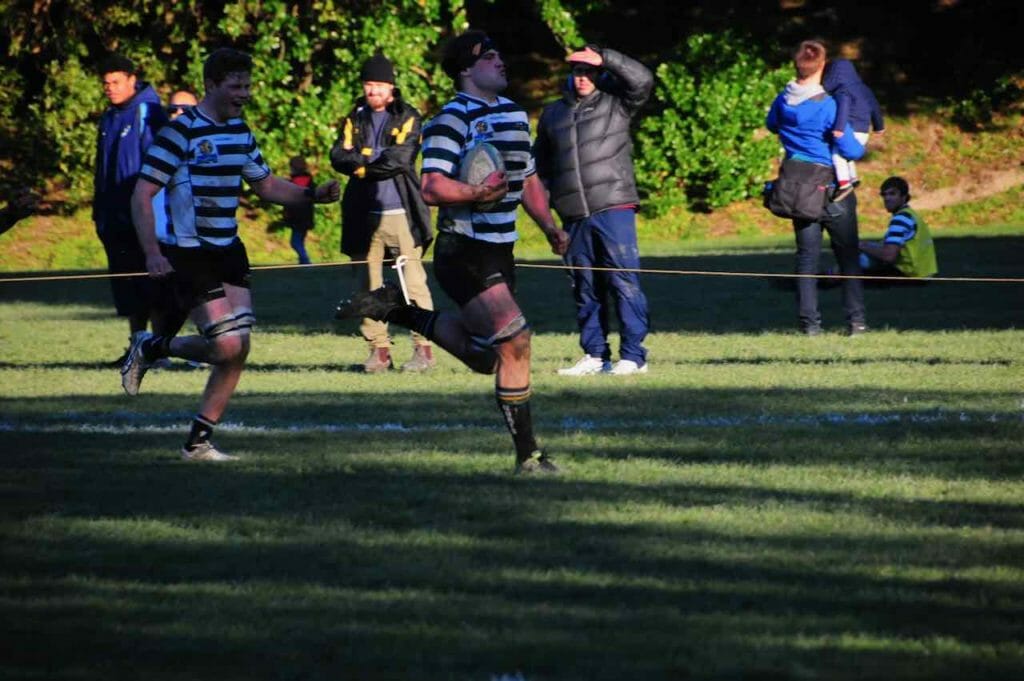 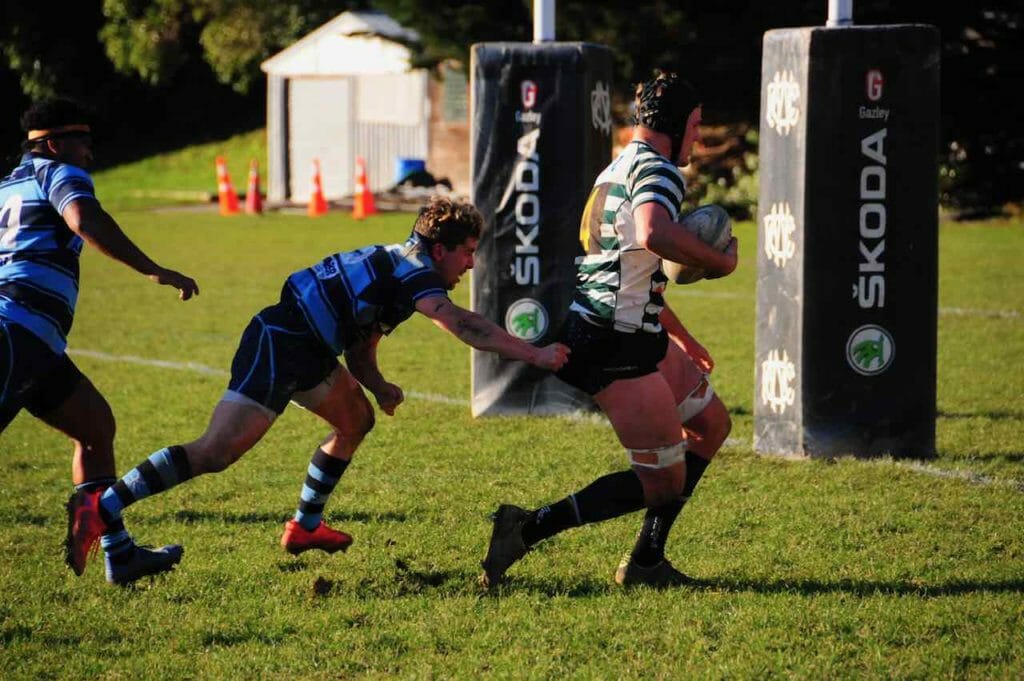 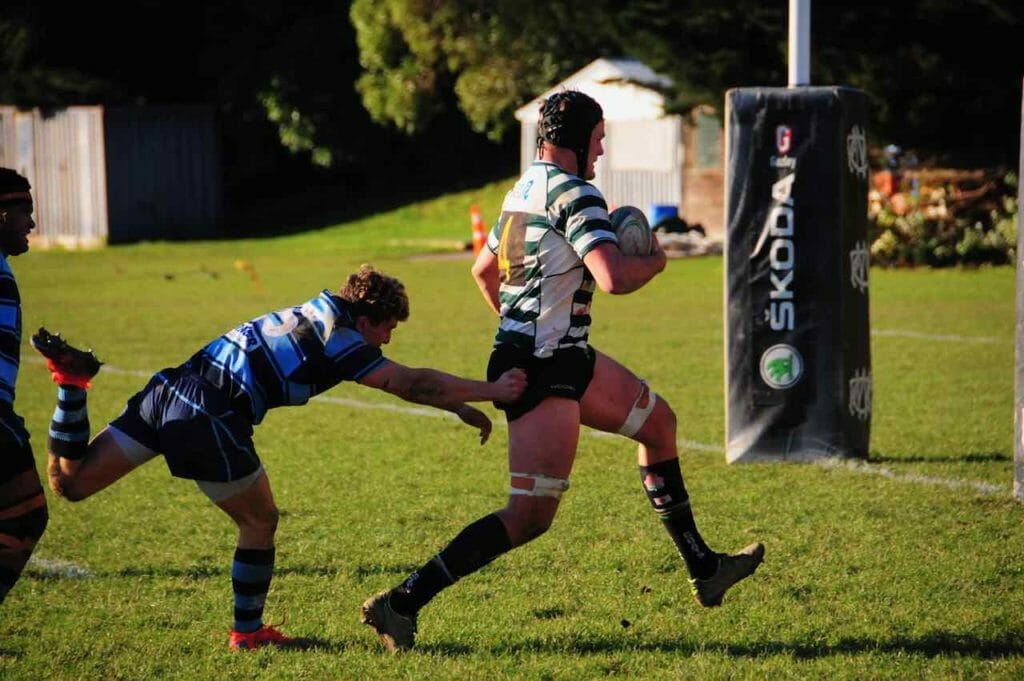 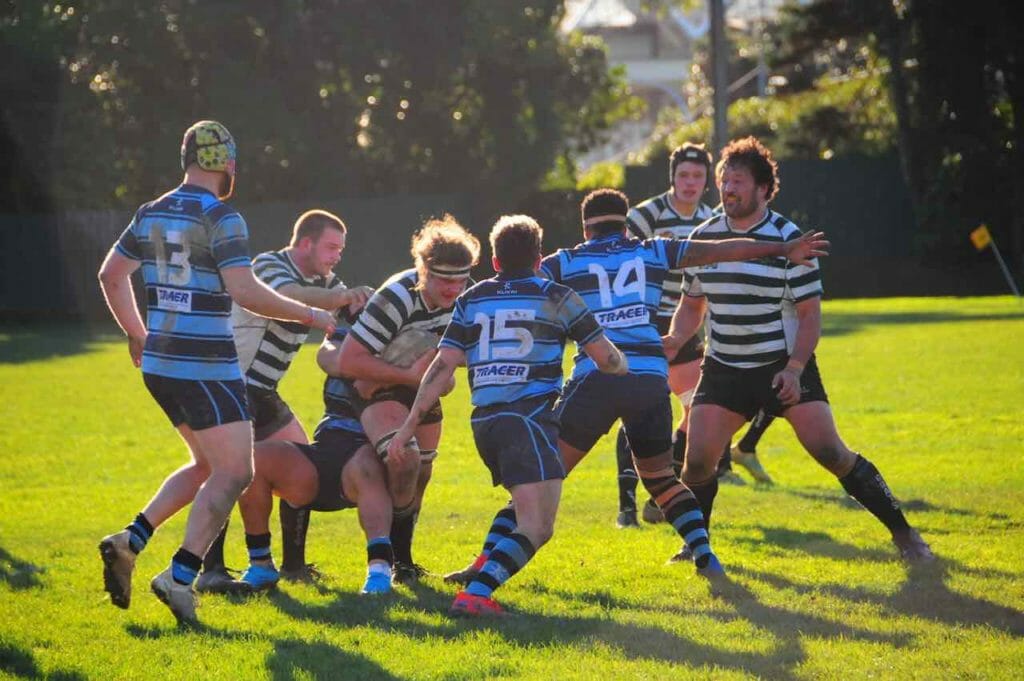 OBU started from the Basin Reserve end back to the changing sheds in the first half. It was a beautiful sunny day but the sun was quite low on the horizon making it difficult playing into it. There was no wind of any concern and the mercury struggled to get to double digits. Commentary coming to you from the scoreboard grandstand.

John ‘JC’ Cable was kindly present to correct my errors.

5 mins – OBU turnover a Johnsonville lineout the ball goes out to the left and back to the right a few times before Sam Coombs crashes over the line. Converted by Dale Sabbagh

11 mins – Johnsonville on the attack. OBU turns it over and Callum Harkin clears it downfield for Sam Reid to chase. Sam gets up to pressure well but with the naked eye, it looked like he was stepped and instinctively put the foot out which partially tripped the Johnsonville player. Clubrooms discussion afterwards reveals Sam says he went to kick the ball as the Johnsonville player picked it up. Either way, it doesn’t matter the ref calls him over to issue the yellow card.

17 mins – OBU is camped on the Johnsonville line. After a few pick and goes Shamus Langton charges to the right side of the ruck and gets over but is held up.

18 mins – From the resulting scrum Dale runs it around the outside of the defence and into the right-hand corner. The ref calls it back for a scrum to Johnsonville. I assume it was lost forward in the dive but the referees signal isn’t clear from my position.

22 mins – OBU elects a scrum deep in Johnsonville territory after taking the penalty advantage. The ball is cleared to the right and Dale goes around the defenders and dots in the corner and converts it.

27 mins – OBU is penalised 30 meters out in front of the sticks the Johnsonville kicker lines it up but launchers a worm-burner. The score is unchanged.

37 mins – Matt Fowler breaks around the side of the ruck where Johnsonville had been too slow to mark up. He gets in behind the defence quickly, commits the defender and offloads to Taine Plumtree who saw the opportunity opening up and gassed it to be in support for the pass. Dale converts it.

40 mins – OBU launches a dominant scrum and turns over the Johnsonville feed. Adding insult to injury the scrum drives over the line for Shamus to claim the pushover try.  Dale keeps the kicking run intact by slotting the conversion.

42 mins – OBU makes a mistake running the ball out from our own territory. Johnsonville turns it over. It looks like it’s going to be a regulation run in for the halfback but he gets caught in a good cover tackle. The loosehead prop for Johnsonville ducks around to the right of the posts to claim the pot of gold.

45 mins – OBU brings the ball out from their own territory. Caleb Delaney launches a big long cut-out pass to James Poloniati who steams in from about 35 meters to dot down in the corner. Conversion misses. Reece Plumtree comes on for Callum Harkin.

55 mins – Great run down the right-wing by Reece with a great inside pass to Sam Reid to finish it off. The conversion was successful. Lawrence Lim on for Fui. Lawry, a popular figure, gets a rousing reception from his mates in the Prem Reserve and Colts teams watching on from up on the terraces.

70 mins – Sam Reid takes a good run down the right-hand side of the field and releases the pass to Reece running off his shoulder. Reece cuts back on the angle to the posts to shake any last hopes of a Johnsonville defender covering.

78 mins – Johnsonville penalised in their own 22, quick tap taken but comes to nothing Johnsonville not back 10 so we go again. Eventually, Johnsonville number 15 can’t help but play the ball on the ground. He gets a yellow card for his troubles.