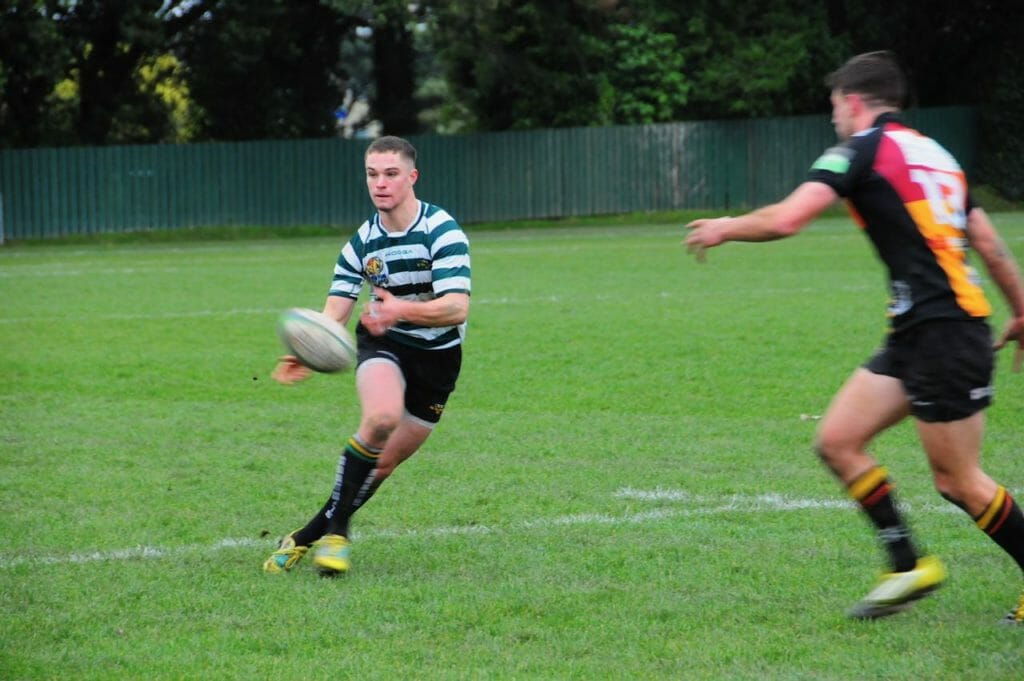 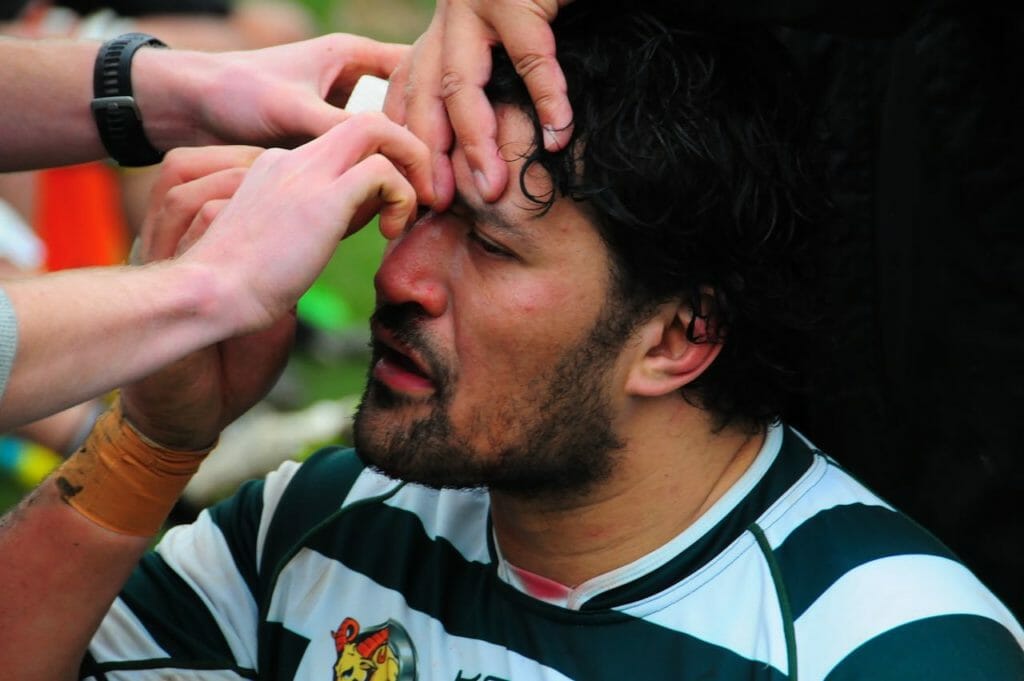 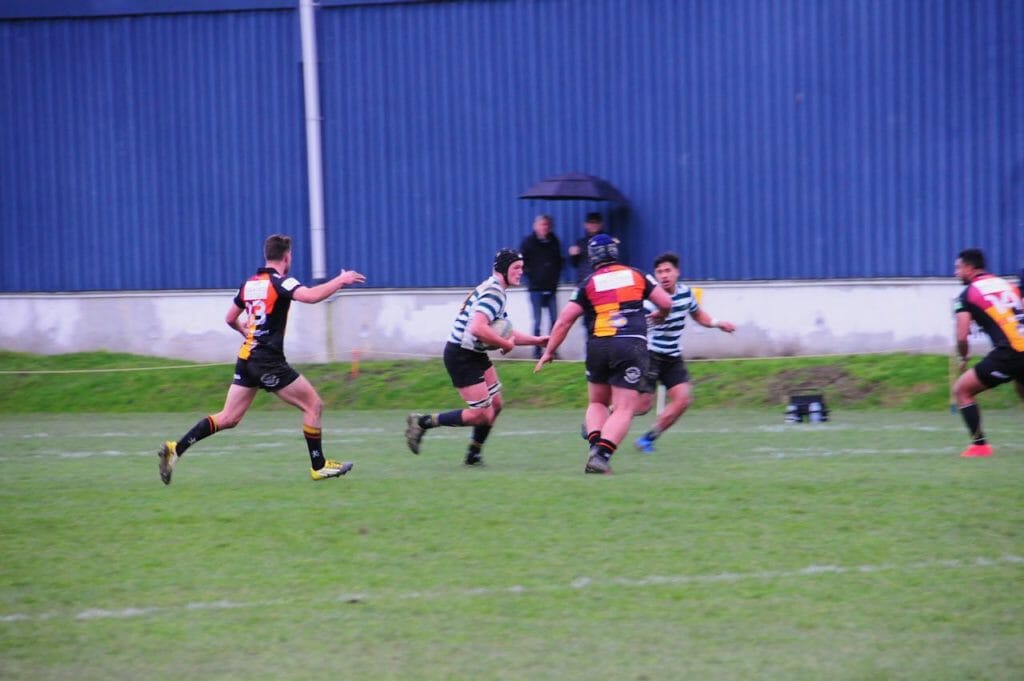 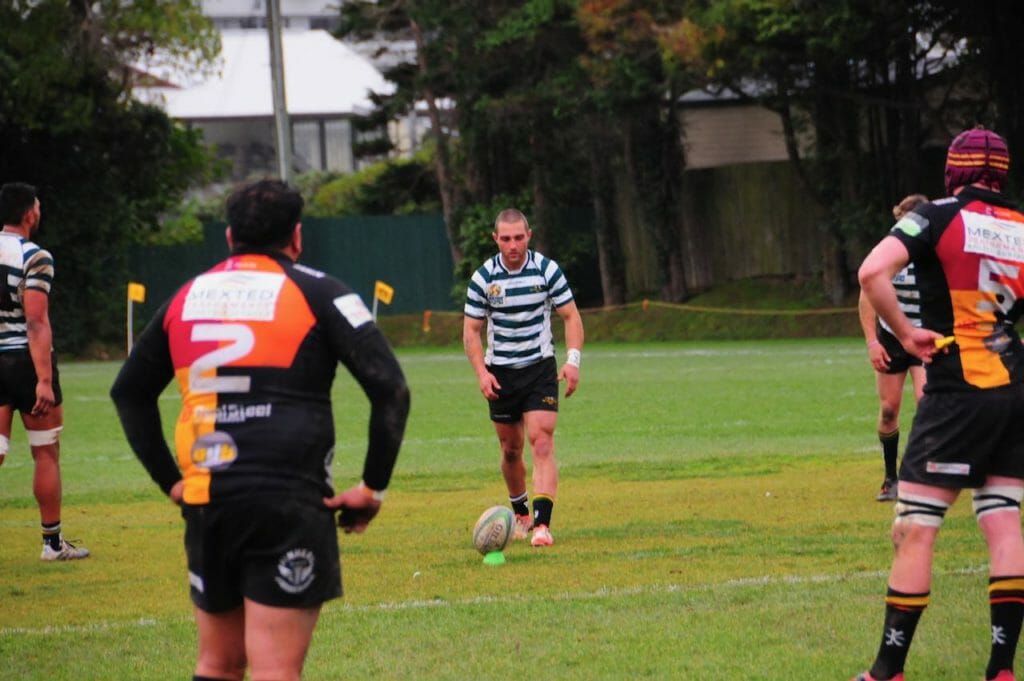 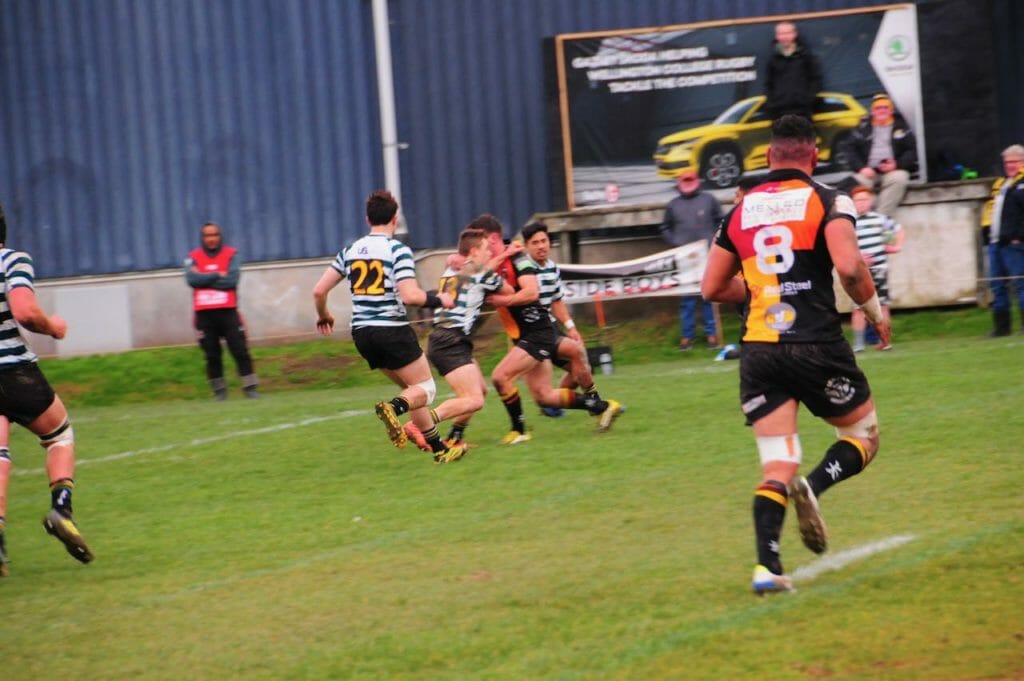 This was never going to be an easy match. History tells us that you can never assume that you’ve beaten Upper Hutt until the final whistle. They certainly stuck with us in the first half and at half time we knew we were in a tight contest. Fortunately OBU had a strong bench and started to run away in the last quarter.

The forecasters had told us it would be overcast and dry. It was overcast and wet with frequent showers throughout the match. It was cool but not bitterly cold. What little wind their was had little effect on the play. The surface was good, a bit sticky but firm with no pooling of water.

OBU was playing from the Basin Reserve end in the first half.

There is an impressive lineout drive followed by some slick hands in the backs. The ball is moved to the left with a quick flick on to Sam Godwin who dives over, try! The conversion from wide is good

Lineout penalty to Upper Hutt about 38 metres out in front. It drops short and is cleared

Upper Hutt take the lineout from a penalty and setup the drive. They then execute a cut move on the centre who goes through and scores it under the sticks. Easy conversion taken and scores are locked.

Fui heads to the sideline to get some cranial claret taken care of. Lawry takes the field but this week the fan club have a 30 second delay before the cheer for some reason!

Jack Green goes down in a heap near the left-hand touch about the 10m line after a move down the sideline. The referee shows no sympathy and continues with the next scrum back infield to leave Jack the indignity of the bum shuffle to get off the field! Oliver Paotonu replaces Jack for the rest of the game. It looks like it might be a hamstring injury. Hopefully it’s not too severe and Jack is back with the team soon.

The Upper Hutt Far Side boys claim that it could only be a back with a hamstring injury as forwards think that’s something you roast on Sundays.

Good move to the right side of the field. The ref plays advantage for the Upper Hutt backs being offside. Knowing the advantage is there OBU kick for the corner but it just goes out in the corner before any scoreboard adjustments are needed. We come back for the penalty and elect to take the shot 22m out and handily placed to the middle. But just as we were banking on it we accidentally applied the commentators curse and the shot misses.

Fui comes back with a bandage that the 1980s would be proud of and Lawry takes a seat.

OBU takes the lineout from a penalty deep in Upper Hutt’s half. There are several pick and go’s on the Upper Hutt line with Sam Godwin among those having a good dig at the line until James Poloniati completes the move by crashing over to the right of the posts. Conversion successful.

That’s the way it stayed until half time.

OBU are penalised for hands in the ruck. Upper Hutt take the shot in front about 30 meters out. Once again commentators curse strikes as it looks like an easy shot but misses.

The first lot of tactical subs come on – Shamus, Paddy and Morgan for his 50th on and Sam Coombs, Tiaki and Sam Godwin off. All those sitting down contributed well to the cause!

There is a frantic OBU attack with quick pick and go’s on the Upper Hutt line. Upper Hutt do well to repel the attack for now and it’s held up in goal. OBU feed to the scrum.

The OBU scrum marches the Rams back and Shamus takes the spoils from number 8.  Conversion successful. Matt Fowler comes on for Kyle Preston.

Upper Hutt fumble a lineout in their own half. It ends up with James Poloniati. From the resulting melee it comes out to Paddy Carter in the middle of the pitch who with horns locked bumps a Ram back on his backside ensuring the shorts will need a wash. He then runs it into the line with good pace and crashes over near the corner. The extras are added.

Josh Gimblett gets a break on the bench after a hard working half. Matt Sleith gets a run on the side of the scrum.

The kickoff ends up short so we have a scrum on halfway. There is some great play off the back of a solid scrum from Shamus and some clever interplay between Sam Reid and Reece but it breaks down.

Lawry comes on for Fui.

There is then some good play from Upper Hutt giving themselves every chance but frustratingly for them the last pass goes to grass and dribbles over the sideline.

Upper Hutt penalised for holding on. The quick tap is taken and from the next phase Reece drops a nice inside ball to brother Taine who tracks it in to get the 5. Conversion misses.

OBU break out of their own half with some fast work. OBU got in behind the defensive line a couple of times and it looked like Callum H would take it all the way for a second but just got caught. From the phase the ball is moved wide to the left and Taine returns the favour to brother Reece with the last pass leaving a run to the corner. Conversion drifts away.