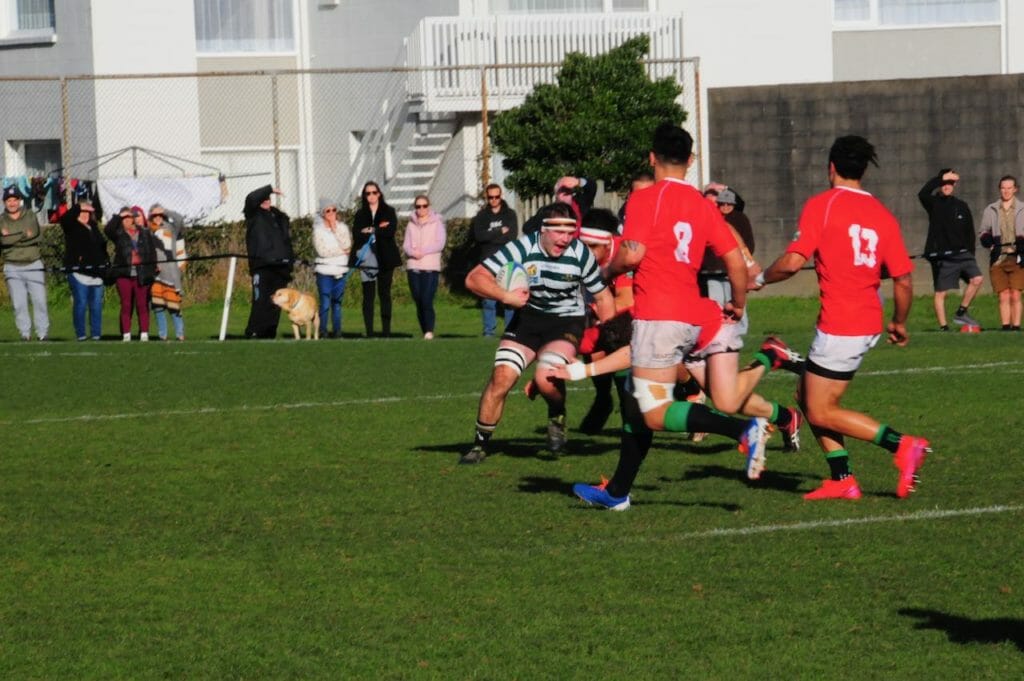 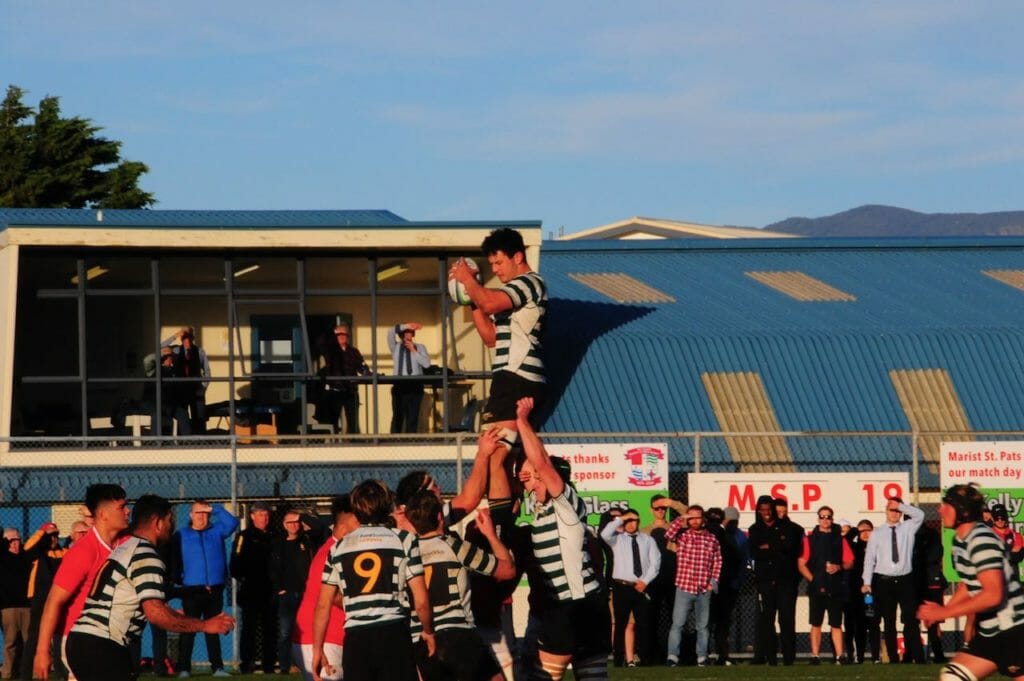 This was never going to be an easy match. MSP have recruited well this season particularly in the backs and welcomed some Hurricanes experience in the Proctor brothers to the starting line-up.

It was old-timers day for MSP and a fair few of the older members had turned out to their clubrooms to preload!

The weather was fine with the wind blowing diagonally down the pitch from the north into the south-eastern corner where the field dips away a little. the sun was low in the first half and difficult for OBU to deal with playing into it from the southeastern corner. It would be even worse for MSP in the second half.

OBU was playing from Gym end toward the road in the first half.

John ‘JC’ Cable & Jaesen Sumner were kindly present to keep an eye on the play while I wrestled with the screen lock on my phone. We are positioned up beside the video platform on the northern side.

The tone for the match was set early scrum-wise by OBU. A powerful shunt spoilt the MSP feed which resulted in a knock-on in the backline due to the backfoot ball.

A series of pick and goes near the MSP line in the left corner resulted in a penalty to OBU. Dale steps up and nails the shot on the 22m line about 15 in from the left touchline

From the kick-off there is a penalty for a high shot on Paddy. The penalty kick doesn’t find touch. The kick is followed up well enough to pressure MSP whop are finally able to clear to the touch after a couple of minor wobbles.

MSP manages to get it wide to their left side close to the touchline in front of us. The MSP player makes a great burst upfield but eventually, it breaks down and we go back to the penalty the ref was playing advantage for. The shot is successfully taken from 35 metres out and just to the right of the posts.

MSP puts up an up and under (or ‘Gary Owen’ for the northerners), then they regain at the ensuing ruck and the halfback chips downfield. Sam Reid has no choice but to run it into touch near our line on the far side of the paddock.

From the lineout MSP throw is not straight so OBU gets to clear from the scrum. Pressure diffused for now.

MSP sets up a driving maul from a lineout but OBU gets the drive on. The maul breaks up with MSP players in behind our forwards. MSP flanker and halfback both have a dab at the line but it’s the right-winger who busts through for the score. The conversion misses.

OBU charge down an MSP clearing kick. Ty Poe claims the loose ball and scores it under the sticks. The conversion was successful.

A great move from OBU down the left-hand side of the field, Shamus makes lots of ground commits the defence and sets Paddy for the pass but it goes behind Paddy. MSP runs it out. There is a brief altercation. The Assistant Referee puts his flag out and a discussion ensues with the ref. The referee calls the captains together and presumably issues a warning to both teams to keep it clean despite what looked like a punch thrown by the red player.

Kyle darts down the blindside and chips past the first line of defence. He regathers under pressure from 3 defenders and scoots the rest of the way down the far sideline to score it in the corner. Conversion unsuccessful.

Shamus crashes through the defence with some good pace and offloads to Finbarr. Reece ratchets up the pressure with an attack down the close touchline. OBU is right on the MSP goal line but are penalised. Can’t tell from our position what it was for. Unfortunately, someone says something to the ref so we deservedly get marched 10 metres.

OBU is in MSPs half again and looking likely but are penalised for holding on in the tackle. Good play from MSP flanker to beat the cleaners to the ball. MSP kick into the far corner.

From the lineout MSP over-throw the ball and Kyle makes a great 40-meter clearance.

MSP is penalised for backs offside. Callum steps up to have a long-range shot from just inside the MSP half and out to the left. Kick misses

MSP on the attack, OBU backs are caught offside 35 metres out and slightly to the right of the posts. Kick landed

A long sequence of pick and goes on the MSP line. An MSP player crashes over the top believing he is onside and concedes a very obvious penalty. Dale successfully takes the shot.

OBU concede a penalty for holding near the 10-metre line straight out in front. Kick is successfully taken.

Paddy claims the kickoff with a memorable AFL-style leap.

OBU move the ball wide to Sam Reid who slips through the first tackle but can’t get through the second and eventually the ball runs into touch. MSP again overthrow the lineout. Morgan tries to gather the ball but knocks it on. MSP feed to the scrum.

MSP manages to clear the scrum which is under pressure and begin a promising period of attack near the OBU line. OBU player gest over the ball and wins the penalty which is cleared to touch taking some of the pressure off but we lose the lineout.

Matt Fowler makes it on for his 50th replacing Kyle Preston at the base of the scrum.

Sam Godwin on James Poloniati Off

A great driving maul from OBU. Eventually, MSP concedes the penalty and OBU elects to kick to the corner.

Another great driving maul and an MSP forward rolls the dice by dropping it and gets away with it this time. Eventually, OBU knocks the ball forward.

MSP clear their line from a massive kick by James Proctor playing at 2nd 5. He kicked from the 5-meter line and the ball eventually goes out just on OBUs side of halfway.

Almost an action replay with another great clearing kick from Proctor.

MSP are hot on the attack and looking dangerous. There is an OBU player down. It turns out to be Matt Fowler in his 50th. Kyle comes on to replace him as a precaution.

Morgan comes back on sporting a bandage on his head. I missed where he went off! Sam Coombs leaves the field. Taine Plumtree is replaced by Josh Gimblett

There is a series of Pick and goes on our line. Eventually #19 James Tuia crashes over. Conversion unsuccessful.

Sam Coombs is on for Finbarr Kerr-Newell and somewhere along the way Matt Sleith came on at hooker for Kenan Gillson.

OBU just need to hold the ball and work it back up the field to get in position to pressure MSP into a mistake.

OBU puts the drive on from a lineout but the ball is knocked on.

OBU desperate now tries to run it out to the other end of the field but MSP turn the ball over in our 22 and the 1st 5 for MSP lines up and slots the drop goal.

That’s the way the match ended. A riveting game with a very tight finish. A few small differences with perhaps some easy ground given 2 or 3 wide of the ruck and the booming boot of James Proctor being 2 of the deciding factors in this game.

I get the feeling that this could well be replayed over the coming weeks in a semi or a final, but let’s not count our chickens just yet. Another almighty challenge awaits against Tawa out at Lyndhurst Park next week.